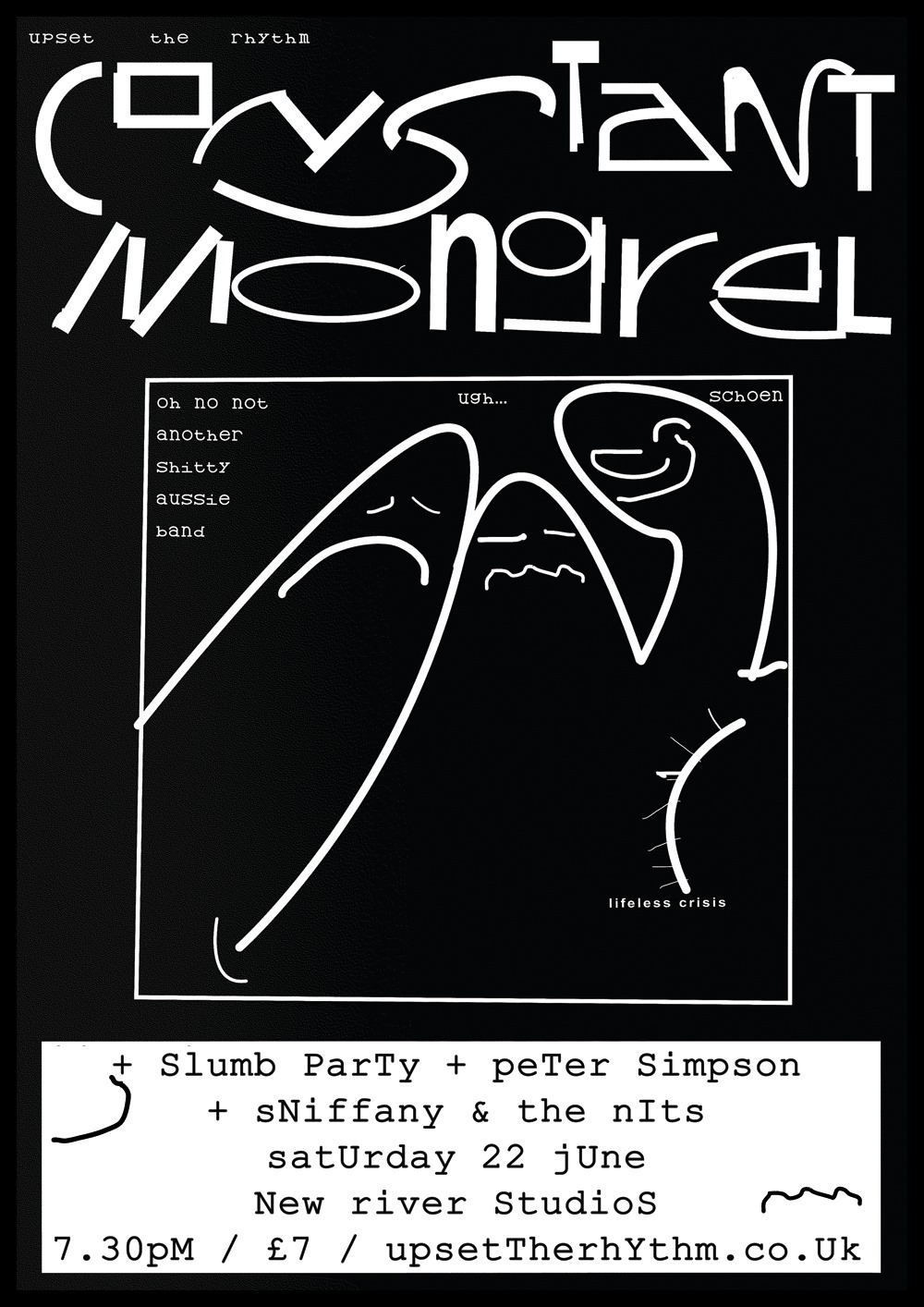 CONSTANT MONGREL are a Melbourne post-punk band with releases on Silt Breeze, RIP Society and most recently La Vida Es Un Mus and Antifade records. Over their 10 year existence Constant Mongrel have added members while developing a unique sound and continually built momentum leading to their successful ‘Living In Excellence’ LP in 2018. The latest record has a sharper British Post Punk expression reminiscent of legendary acts such as Wire, The Fall, Flux of Pink Indians while maintaining their Australian edge and character that exist among their local brother/sister bands Total Control, UV Race, Ausmuteants, Lowlife and Terry. With striking riffs and catchy rolling bass over an often unhinged, vibrant rhythm section with fried saxophone and synths Constant Mongrel are a captivating live band. The bands lyrics and themes vary in subject matter from songs of certain romance, to the joy of a riot, atrocity of western religion, an abundance of a fresh modern fascism, white-middle-class-self-entitled guilt and the beauty in misinterpretation. But behind every idea the tongue remains continually in cheek as the band’s humour seeps through and prevails in its sound.
https://lavidaesunmus.bandcamp.com/album/living-in-excellence

SLUMB PARTY are funked up post punkers from Nottingham. Point your ears in their direction and you’ll find the righteous blast of a post-punk-skronk party of such hip-gyrating magnitude that you’ll wanna take a bulldozer to your nearest nightclub and pull shapes on the ruins. Their debut 7″ dropped earlier this year via German label Erste Theke Tontraeger, and their debut LP (Drunken Sailor) followed shortly afterwards. Fittingly, songs are concise and snappy, with flashes of everything from the rhythms of 80s Athens, GA (Pylon, early B-52s), the soul/punk hybrid of both The Nation of Ulysses and The Make-Up, the hyper-whacked sax rush of the Contortions…plus yer Minutemen, yer Gang Of Fours, yer Shoppings, yer favourite bands with attitude and heads so full of ideas you’ll find yourself wondering why most bands fail to make a sassy combination of arts and smarts sound this essential.
https://slumbparty.bandcamp.com/

PETER SIMPSON just debuted his self titled mini-album. Running with the mantle that post-punk was actually prog in disguise, the record evokes that particular vein of popular music, in the 80s, where the prior generation of outward thinking rockers re-energised their approach by absorbing the new-wave. Fans of Peter Hammill’s K-Group albums, Bill Nelson’s Red Noise or even the Eno-inflected John Cale Island period, will no doubt recognise elements of each in these 6 mazy compositions.
https://petersimpson.bandcamp.com/