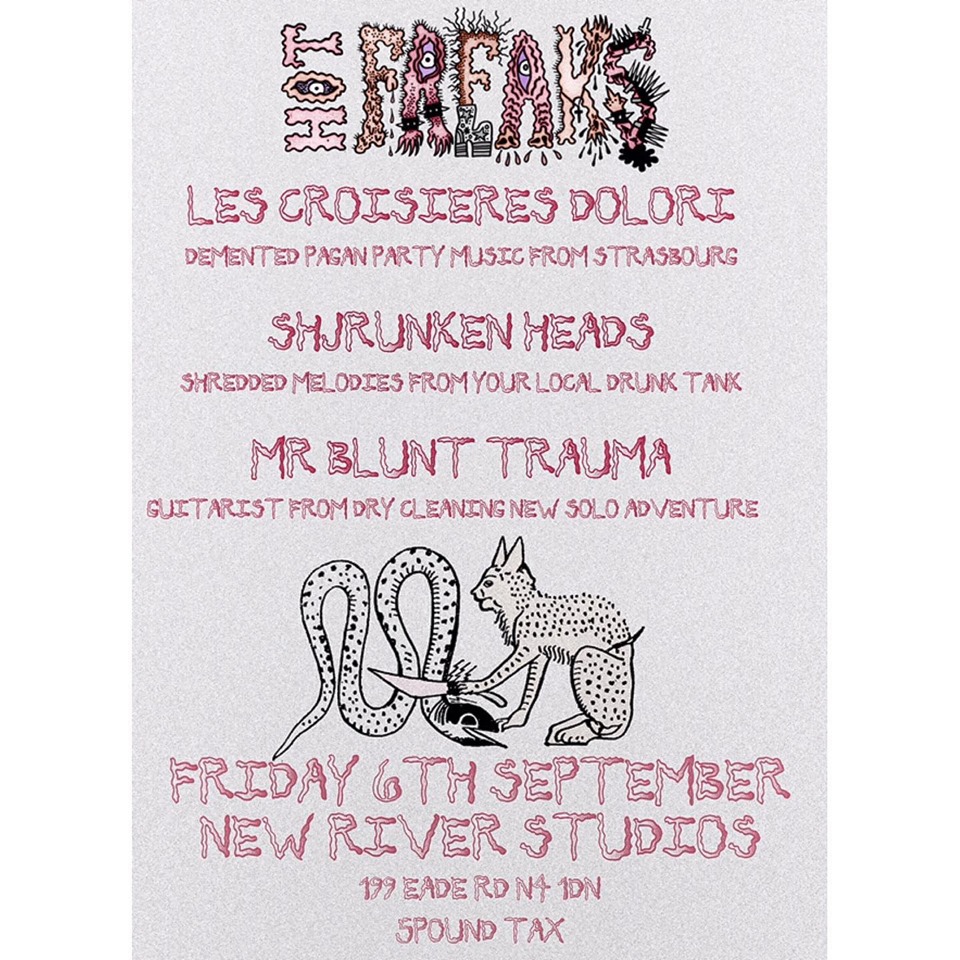 Two girls with tapping shoes on amplified metal boards,
a trombonist on his bed of roto-toms and various drums,
some yogurt songs on foggy layers of synthetiser,
an eastern-nowave-infused blues with its analogical bass.
The Croisières Dolori, a trip in a flat-bottom barque, with a stop at the “deckchair” bar, a pagan party lost somewhere in the meanders of a forgotten delta.

Shjrunken Heads
Emerging from a basement, somewhere in the Afro-Anatolian annals of Hackney, London, a group of friends going by the name Shjrunken Heads explore kosmische highways via the post-punk roadmaps of North-West England and New York.
Think Hawkwind meets Gary Numan, or Joy Division playing darts with Can.
A selection of live jams recorded at Total Refreshment Centre in 2015, resulted in Oracle Bones, a collection of raw, cinematic, gothic pop experiments.
2017’s home recorded FLUX, plunged listeners further into darker, more expansive psychedelic landscapes.
2018 saw the release of Rainham Steel. 4 tracks representing the band’s response to live performance – an urgent, more anthemic, rhythmic delivery has emerged.
2019 has provided an unexpected update with the arrival of a new member in the form of multi- instrumentalist Marion Andrau. The quartet have locked themselves away in their Drunk Tank and are now ready to emerge and distribute the fruits of their labour.
See it. Say it. Sorted.

Pish Dolls
love after death duet puppet show with stuffed animals and microwaves.
seriously i’ve seen this show and it’s incredible. imagine Jim Henson on acid (as if he wasn’t already) and he’s trapped in a kitchen like that bit in A-Team when they have to construct something amazing to save the day but that thing they have to construct happens to be a bizarre stage show – this is it!